I realized a long time ago that I had a unreasonable amount of time on my hands for a 20 something. I don’t party, much. I only drink on occasion. And I spend most of my free time either gaming or watching random movies on Netflix. Yes, I have a girlfriend, but considering she has a life as well this leaves me with insane amounts of free time. So, I am going to try a new try of movie reviewish thing. This is more my raw thoughts towards the movie and how I felt about it rather than giving it a traditional grade.

With that being said, I give you “Pretend We’re Kissing”

If I had to describe this movie in one word it would be awkward. Seriously, no joke, they could have changed the name of the movie to Awkward and it would have been just fine. The main character Benny, Dov Tiefenbach, is a introvert who kinda meets a girl at a concert and never says anything to her. He then sees the girl later and she makes the first move. We spend most of the movie in the mind of the main character as we get to hear the things he stops himself from saying. We also get an introduction to his newly nudist roommate Autumn, Zoe Kravitz, who is mooching off of him.

I can tell you right now that Autumn is a completely useless character. If you took her out of the movie entirely it wouldn’t have changed the overall plot. She seems to only be there to be ridiculous. The story manages to somehow only get more awkward from there. After getting the girl Benny manages to somehow out awkward himself and mess that up to. There was a sex scene that made me wince in pain. Pain! Why am I watching this? While we are in that vein, some of the scenes drag on a little to long. I swear Autumn was hugging Benny for a solid three minutes. The sad part is that I know exactly what its like to be Benny. To be stuck inside your own head. Its a beautifully painful experience.

Sex scene number two and I’m still wincing. I understand the story that they are trying to tell, but it doesn’t stop it from making me want to claw my eyes out. This is the classic tale of be careful what you wish for. Benny wanted the girl, he got the girl, then he fucked it up. He was so focused on getting something he never had before that when he got it he didn’t know what to do with it. He wasn’t ready.

In all honesty, as much as I want to rag on this movie it is a perfect example of relationships in real life. Sometimes you don’t get a second chance, and you have to just make sure that you are better for the next person.

What Is About Alex About? Seven college friends decide to reunite over a three-day weekend after one of them attempts suicide. While the friends are there to keep an eye on Alex, that doesn’t stop them from reuniting old flames, rehashing the past, sparking dead conflicts, and reminiscing about a world that seems to be passing them by.

I found this movie randomly on Netflix after scrolling through a bunch of sad movies that I’m never going to watch. A movie about depression and suicide, how close to home. Right off the back I saw some familiar faces, Max Greenfield and Aubrey Plaza, and I had some time to kill so I decided to jump into this movie. From the moment we start getting introduced to characters the cringe-fest was real. Every character in this movie seems to have a hidden motive driving them. Josh (Greenfield) likes Siri (Maggie Grace) but is sleeping with Sarah (Aubrey Plaza). Siri is hiding her pregnancy from her boyfriend Ben. Sarah wants to be with Isaac. And on and on and on. In the same breath these people look down upon Kate, Isaac’s new 20 something girlfriend, for being young and naive. Funny thing is, she comes across as one of the most mature characters. Instead of whining about life like Josh and Sarah she is actually trying to help people.

The Good? Max Greenfield and Aubrey Plaza are the shining stars of this movie. Their stories were not only the most interesting but also the most real. They are together out of convenience. The tone of this movie was beautiful. It managed to capture the feeling of lost that comes with not knowing what to do with your life.

The Bad? “About Alex” has a lot of good ideas that are lost in translation. Its the type of story where several themes are presented at once but nothing really goes anywhere. Once we get to the end of the movie Ben has a flashback to his meeting Alex in college, but nothing gets solved. The state of Ben and Siri’s relationship is left up to the viewer. Alex is still working through his demons. Isaac just tried to cheat on Kate, and Josh is still pinning over Siri. Nothing really changed besides some minor things. And while this might be an amazing representation of real life it is a piss poor way to end a movie.

Why You Should Watch It? This movie is filled with interesting views and dialog. The characters are a little stale but it doesn’t stop the movie form being somewhat enjoyable and relatable.

What is Dare? A drama centered around three high school seniors – an aspiring actress, her misfit best friend, and a loner – who become engaged in an intimate and complicated relationship.

Alexa Walker (Emmy Rossum) is a young actress who gets told by her idol that she has no passion. She is playing someone who is craving lust yet she doesn’t even know what that feels like. So, she dares herself to be different and decides to lose her virginity. She picks Johnny (Zach Gilford), a bad boy who is known for being distant. However, to complicate things further, her sheltered best friend Ben (Ashley Springer) also dares himself to peruse Johnny.

The Good? Emmy Rossum was just about the only good thing about this movie. Her performance was just about the only one that didn’t make me feel bored out of my mind. However, the plot has some redeeming values. Dare manages to do everything you thought it wasn’t going to do. It is almost as if movie is daring you to see how crazy it can get. This movie was constantly proving me wrong. 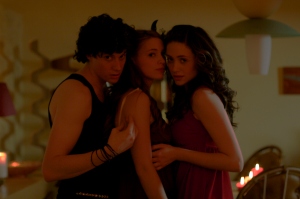 The Bad? The plot is shaky at best and there is one character that serves no purpose. You think that she is going to go after Rossum but at the last minute nothing happens. Springer’s performance is cringe worthy. He made me feel awkward through his awkwardness. Also, this movie has the magical power of going nowhere, right up to the very end. There is no resolution, only more conflict it seems. 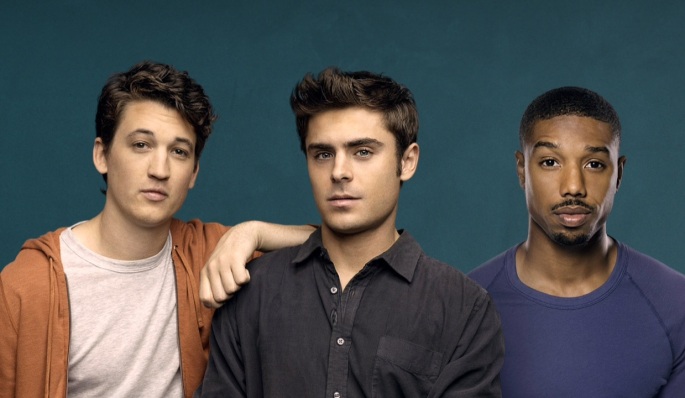 What is That Awkward Moment About? Three best friends find themselves where we’ve all been – at that confusing moment in every dating relationship when you have to decide “So…where is this going?”

Jason (Zac Efron) finds himself inbetween a rock and a hard place when he meets Ellie (Imogen Poots), an up and coming writer, after pleading to stay single. Mikey (Michael B. Jordan) is broken after he finds out his wife Vera (Jessica Lucas) has cheated on him and wants a divorce. Meanwhile, Daniel (Miles Teller) is struggling with his feelings for Chelsea (Mackenzie Davis).

The Good? Imogen Poots shines in this movie and has quickly become one of my favorite actresses ever. The way she pulls off total independence while still maintaining to be approachable and relatable is astounding. Her delivery is spot on, and she plays the perfect foil to the playboy Jason. The characters in the movie feel like people I would know in real life. Michael B. Jordan also does a fantastic job as the guy who is totally over the hookup culture. I have been this guy on more than one occasion so it was easy to see where he was coming from.

The Bad? That Awkward Moment is a bromantic comedy, which is a genre that isn’t really well accepted yet. Guys won’t watch it because it seems to chickish, and girls won’t watch it because the story is from a male perspective as he is talking about women. The movie can also be a little slow at times, and certain characters feel completely wasted. For example, Mikey and Vera’s storyline seems like it should have been the main focus of the movie, since it is the event that sparks the main problem, but it gets shoved into the corner to make room for Daniel awkwardly navigating life.

Why you should watch it? The Awkward Moment has a lot to say about the generation that we live in. It does a good job of being self aware and mimicking the language and attitudes of 20 somethings. All in all That Awkward Moment is a good time and comes off as very relatable. It isn’t the most memorable movie but it is a great bromantic comedy.